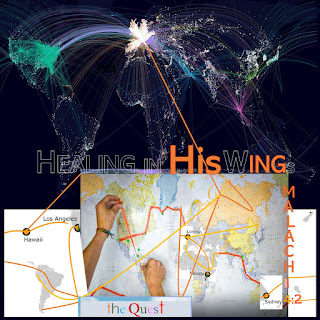 Over to New Roads, making sixteen Limes into lemonade... the LORD is more Majestic Everyday SALEM... packed/ prepared and already in the process of moving, the house I leave behind is called “The ARK”, my big Mama/big sister Diana commissioned a wooden plague with the name, ARK that hung proudly on a wall at the front of the house. Due to weathering, it broke into two; not surprised as it had endured over the years all kinds of weather. It laid on the lawn for nearly year and one cold winters day in January 2020, it caught my eye as it balanced delicately on icy grass tips, frozen, as I passed, perceived HolySprit whispering in my heart...the ARK has settled at the mountains of Ararat! send the raven, see if there is Land…Now send the dove. Healing on His wings...but before this point let me merge two lines together so we can have the full canvass. The full picture before us…

Mid-last year, 2019, I had the most bizarre dream that I had been invited to An Exhibition of the World... and I thought it was because I desired to go to the United Arab Emirates for Expo 2020, that was to be hosted in Dubai originally planned to open on October 20/2020… but in my dream, I was in some sort of underground cave parking, the continents of the world were all on this rock and set on pillars, they looked so gigantic and there was a red ribbon-like the ones in museums where the art on the wall separates the viewing public. This being as I cannot describe him, without the exchange of words asked for my invitation at the entrance. All over a sudden, the ticket was in my hand. There was no one else but in silence with the wind blowing gently but it felt like we were in the depths of the earth….

Got so excited as I saw Africa, thinking of the many times I had looked at geographical maps of the continent, hung up, per se... the exhibition of the world… overcame by a certain urge to want to touch it. This would have required me crossing the red ribbon...looking up at  Africa, it looked so real; it seemed as if I could see what was actually happening all over the continent at the same time ...without us speaking I understood I was not allowed to cross the red ribbon. Started praying to wake up as I knew it was a dream, calling on HolySpirit on God In Jesus... peace came all over me as we walked the distance of the continents, as it got darker was asked to look and saw these gigantic foundations with men who looked like tiny ants in comparison to the pillars but they busy trying to scrub the foundations...ants next to a giant oak tree...we got to the end of the exhibition, the beginning and on the same wall, the same spot, in front of me a different continent. Asked for a ticket and it appeared again in my hand. This time I started crying asking God what He was trying to say.

I share all my dreams with my two dads and they agreed to stand in prayer ...in a conversation, with dad ADenis we talked about looking at global maps of migratory birds/ flight paths of planes and it seemed like a deja vu as I remember all the pathways into the countries even into the remote places that I have never gone or seen/ all these places belonged to God. He created them every nook and cranny, [for the Kingdoms belong to the LORD, And He rules over the nations/Psalm 22:28]...the flight paths looked like HolySpirit but in form of a dove of Light with healing in His wings.

In the last few weeks, we have listened to how scientists have modelled and projected the impacts of  CV-19, how it has spread to the population; how countries are anticipating the rate of infection to raise and flatten due to death and recovery rates. Mental/spiritual infection lingers in the air, Hope + Faith is required...felt a pressing from HolySpirit to step outside the ARK, in Faith imagine in my hands I held, a white dove, gently lifting my hands up, releasing the dove into the air ...letting it go...as it soared, spreading its wings, blazing into the sky, along its flight path[s], healing, Healing on/in His wings sending it to specific geographical locations.

Remember, for the LORD searcheth all hearts, and understandeth all the imaginations of the thoughts, [1 Chronicle 28:9].

During our Sunday family prayer meeting our normal way via the internet, as the three of us caught up in three different locations. Talked about releasing the doves as we spent time in the prayer room. But this time also I needed a confirmation from God... here we go. Ready, God has done amazing /wonderful things in my life and also for so many of us he has been Faithful, I believe we are all men like Elijah, like Jesus ...between 4:30 - 6:30 AM every day for a week ...release the Wings of healing ... send Your Dove to places You know they are in dire need of prayer/help, places like New York/ Italy, or Fiji Islands... or where the heart of God is leading You too...Kitengela2Guatemala ...Let us see how far we can go/ believing we are not just seeing the sky but the edges of the universe…if You don't have outside space, don't worry FAITH...is the evidence of things, so Your windows /front or back doors or on Your knees Faith is...see HolySpirit ...these things are given to us….

So that day in early January 2020 released a raven, then a dove that came back ..and now we release healing on His wings...Malachi 4:2...but unto You that fear my name shall the Sun of righteousness arise with healing in His wings. Happy Easter Monday. What do You see, God speaking to Abraham.
#sHop/RuthsNote 2020
Posted by The Quest at 14:55