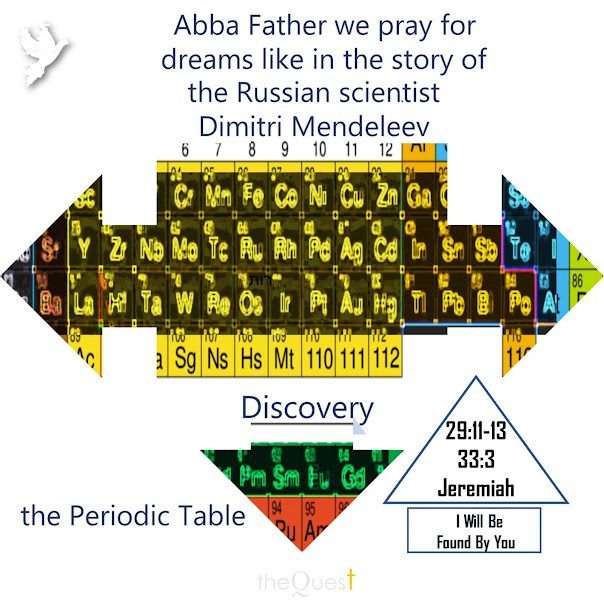 He makes it impossible to do anything so that people will recognise His work.

Almighty God in Jesus name, thank You for Isaac Newtons discovery in 1672, the colour notation explanation of the rainbow,"ROY G BIV", the result from experiments dividing white light into the colour spectrum with a prism... that light could be split into seven colours.

we pray for dreams like in the story of Dimitri Mendeleev; the Russian scientist who discovered the periodic Table... in his dream the elements rearranged themselves in a coherent order finding their places on the Table. He saw something, You, LORD GOD must have showed him something, as he left gaps in his table for yet undiscovered elements, that were discovered past his future and now the Table is complete... he saw something.

HolySpirit come...Abba Father in Yeshuas name , in all things good or bad we can only say thank You, all to Your glory. Thank You for the coronavirus; where it looks like it has done its worst... innocent people dying prematurely; despair; hopelessness; loss of livelihoods; fear; confusion... but You GOD are not a GOD of fear nor confusion. We thank You, we trust You GOD, as You have a plan, like You had a plan when Jesus was crucified on the cross... remind creation of Your power... show Yourself... let Your Kingdom come to a particular group of in Singapore. Let them dream and see a working vaccine. Thank You for the Christians who are scientists in Singapore. Give them a dream that unlocks and undocks this virus. Father in Jesus name thank You for the Spirit of excellency...wisdom and the fear of You, rearrange and sequence the letters…open their eyes to see the real and effective vaccine. We hold Singapore up…begging, Abba Father in Jesus name for a divine intervention for this affordable vaccine to be herald forth…a breakthrough. Let the mountain bow; beholding the beauty of Jesus.

Thy KINGDOM come...to Your glory alone...thwart the plans of the enemy in Jesus name

Introduction to the Courts of Heaven - Robert Henderson (Friday, 29 Jul ...

A blue and white prayer shawl that becomes the flag of one of the most influential countries in history. Israel is a land rich in factual history and the Jewish people can trace their connection to this land not only from stories in the bible but from other people’s cultures across the continents of the earth. The most important point of reference is that the God of gods, GOD of the universe, calls them His and Jesus, His Son is of Jewish descent. Yes, the penny did drop, and I know the bible talks about the genealogy of Jesus that His mother was a Hebrew woman. As I read the chapters of the book, the revelation of His heritage, His mother Miriam [Mary], must have spoken Hebrew and surely, she must have called Him Yeshua. My spiritual blindside unlocked, I thought I knew but must have been ignorant to this truth that is over 3000 years old, Joseph and Mary are Israelis who spoke Hebrew. I felt compelled to read the story in Matthew 15 and the story of Ruth, and these timelines merged and saw a snippet of God's plan for us in His firstborn Nation, Israel, that Hope given by God through the Messiah, Yeshua.

On pain and anguish, the descendants of Abraham have suffered but God has kept them through thick and thin. Suffering is not limited to a few people, but millions of lives have been lost from these people’s groups. Entire generations have been killed/murdered, families losing everything, and it seems more than likely a spiritual force protects them. Still, they hope, and one can wonder if this hope is divinely placed within their bodies/frame by God who has a marvellous plan for each one of them individually. It can be said Jewish people have supernatural endurance, a will to keep moving as a nation their military might is off the scale, that is unexplainable. How else can one fathom or explain their survival and exponential growth both numerically and financially.

Data is key for every scientific experiment and the book explores many different achievements by many different generations of Jewish people from all spheres of life, their significant contributions to humanity. Some of whom I have never read or heard about but are real as the people whose stories we read within the pages of the bible. People compelled within themselves for their ancestral homeland. Some stirred by a deep yearning for a revelation by HolySpirit and discovering their connection to Yeshua. The importance of this identity not only to them but to a believer like myself saved by grace and invited to the table because God wants to stir within His own a longing, a jealousy that draws them closer to Himself. The role and privilege given to us in Romans 11 [1- 36], as partakers of their divine grace.

The road back to Jerusalem for the Jewish people has been extremely difficult. They have been misunderstood over the centuries. Yet again the truth of Yeshua has been trickling back into their hearts through the working of HolySpirit. We must trust the wisdom of God to reveal Yeshua as the promised King whom they await and is also the Son of their God who is our God. How do we pray and love them and at the same time have the tenacity to stand with them either by encouraging them to make aliyah back to Israel. It sounds absurd thinking about their past suffering, what is to come, but yet again they will have to flee in fear away from Israel in the last days according to scripture due to persecution.

In conclusion, this book needs to be read at least twice to comprehend its fullness. The importance of the narrative in this prophetic timeline. How the Jewish people are imperative to the return of King Jesus. The importance of their zeal as a catalyst in widespread of the gospel to the nations from Jerusalem. Personally, looking at the books of Acts and Hebrews 11[22-23], with new understanding, as part of a "come away" with the LORD. My heart continues to overflow with love for them as God desires and loves the Israelites. I resign myself to HolySpirit as some concepts in the book I don't fully grasp. But what I know is to continue supporting them financially/spiritually by either praying for them as others before me did, knowing their God is my GOD.

Cindy Jacobs: Role of the Prophet in Society

Intimacy Growing in the Knowledge of God - Stuart Greaves

Walking With Joy in the Midst of the Growing Crisis On the Earth, by Stu...